While Maryland is a great place to live and work, it is still a marvel that the Maryland legislature, which is supposed to be working for the good of its citizens, has enacted some laws that work to seriously punish Maryland residents. Among these laws are the “caps” on pain and suffering that may be awarded to the victim of a serious injury in Maryland.

Back in the 1980s, under pressure from medical and insurance lobbying groups, Maryland passed a law that places a maximum on the amount of money a seriously injured victim can collect for pain and suffering in court. This law was an effort to stop supposed “runaway verdicts” and hold down insurance costs. Notably, there are no caps just down the road in Washington, D.C., and neither corporations nor hospitals/doctors have fled the District. The Maryland laws in this area are not only confusing, but for any citizen facing a serious injury, they present a harsh surprise.

In a civil lawsuit, the three main categories of “damages” that a victim may recover from the wrongdoer are medical expenses, lost wages, and “non-economic damages.” This last category is routinely referred to as “pain and suffering,” and is the category to which the cap applies. If an injury victim is successful at trial, a jury would render a verdict reflecting a certain sum of money for the medical expenses incurred and for the time lost from work because of the injury. The jury would also specify a sum of money to reflect the pain and suffering that has and will be incurred by the injured party. Because this third category is subjective, and solely up to the jury to determine, pain and suffering damages strike fear into defendants, because a jury may decide on an amount well above what a defendant thinks is fair. And through lobbying efforts, defense interests successfully limited the amount that may be awarded in this third category, no matter what a jury (or even a judge) thinks is a fair sum.

Consider a young victim who suffers the loss of a leg up on being struck by a tractor-trailer. In addition to the horrible pain from the original trauma, the surgical procedures to remove a limb, and the recuperative period after surgery including wound care and gait re-training, the victim must spend her many remaining years carrying the emotional, personal, societal, and employment limitations posed by such an injury. But in Maryland, it no longer matters how severe the impact. In a civil case, that young victim faces a fixed limit on the damages recoverable for a lifetime of pain and suffering. This is true for victims with brain injuries, paralysis, unrelenting pain, and other conditions. 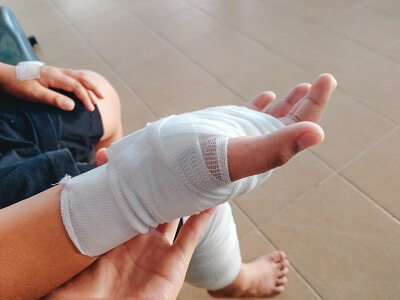 How the Cap Works

With a few modifications over the years, the cap in its present form has a “cost of living” adjustment of $15,000 annually. So while the amount of the cap has crept up over the years, it still lags far behind real-world valuations of serious injuries. For victims and attorneys having to consider a possible cap for the first time, the applicable cap in force is not determined by when the suit is filed, but by when the injury (or death) occurred.

At trial, the jury is not informed that there is a cap. So the jury may return a verdict that contains a large sum for pain and suffering, but by operation of law, the court must later reduce the jury’s award for pain and suffering down to the limit of the applicable cap, and the trial judge has no discretion in reducing the award. Complicating the cap calculation, in a wrongful death claim, there are separate caps if more than one beneficiary is involved, and yet another cap if there is both a wrongful death and survival claim.

Troubling Problems With the Cap

The United States has a legal system that is the envy of the world. And under both federal and state law, the right to have a legal dispute resolved by a jury is deemed so critical, that right is carved into our founding documents. Maryland’s Declaration of Rights, as in other states, guarantees that our citizens have the right to a trial by jury. Juries have long been entrusted to resolve complicated contract disputes, medical injury cases, land title issues, and discrimination cases, and in criminal courts, decide the guilt or innocence of the accused, whose very freedom is at stake.

Despite this, the Maryland legislature determined that Maryland juries are not qualified to award money when a victim presents with serious injuries in a civil case. The cap effectively takes away the constitutional role of the jury in weighing and determining the effect of an injury and what constitutes fair value for the injury.

There are practical problems as well that have been revealed under the damage cap system in Maryland. Juries take their mission seriously, and will often review evidence in detail, argue, and negotiate for hours or more with emotions running high in reaching a unanimous verdict. Imagine their shock to learn later that their efforts were essentially moot - that as they spent a day working to reach a compromise of 4 million dollars for pain and suffering, the victim was never going to recover more than $875,000 anyway under the applicable cap.

Many Maryland lawyers believe that the cap has increased litigation in Maryland. Insurance entities are all about the management of risk. If their risk is predictable and controlled, the insurance folks sleep well at night. If the risk is uncertain or uncontrolled, insurance entities get nervous. Traditionally, it has been the uncertainty of the outcome of a legal dispute that has brought rational people to the settlement table to resolve a case without going to trial. Neither the injured victim nor the corporate defendant is certain that their side will prevail, and a settlement eliminates an outright loss for the victim or a large verdict against the corporation. Our court system prizes settlements and has formal programs to get parties to reach a compromise without trial. With a settlement, there is no trial, saving significant personal, court, and community resources.

What the cap has done, however, is to perpetually control the risk for the defense in many serious injury cases. It is now routine for the defense to simply add up the victim’s claimed medical bills and lost wages, figure out the pain and suffering cap applicable to the case, and know long before trial what their “maximum” financial exposure is. This ceiling on their trial liability has created a callous “what’s the worst that can happen to us” mindset. Defense entities now routinely force certain injury cases to trial because they might win, and have a built-in safety net even if they lose. For them, there is no longer an uncertainty of outcome, and they no longer feel the traditional motivation to explore settlement rather than trial.

The following two tables present the Maryland Caps on non-economic damages, one for general injury cases, and the other for medical negligence cases. The Maryland statutes authorizing these caps are given at the end of each table. If you have any confusion about this, we are available for a conversation.

Why Hire A Lawyer:

You could be speeding or looking at your cell phone, eating, or being inattentive for any reason while driving that might have caused or contributed to an accident.

Sussman & Simcox works with Maryland Personal Injury clients, helping them recover the full amount of compensation they deserve. If you've been injured in any type of car, motorcycle, semi-truck, or SUV accident, Contact us today to schedule a free, no-obligation consultation to discuss your case and get started filing your claim. With our client satisfaction guarantee, you have nothing to lose and everything to gain!