Slip and fall lawyers regularly help victims get compensation after being hurt from falls in Gaithersburg, MD. While it may seem simple to prove that a property owner is at fault when someone is hurt on his poorly maintained property, personal injury law in this area is actually quite complex. If you have slipped on a floor, stairs, or ground that is slick or dangerous, here is how your attorney can prove the property owner’s fault. 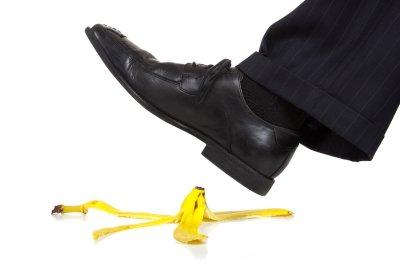 The first step in proving fault involves showing that a property owner failed to act carefully. In short, the injured party and his/her slip and fall lawyer have to show that the property owners did not take reasonable steps to ensure that the property at issue was free from dangerous conditions. For example, an owner at an apartment complex who fails to provide any snow removal or sidewalk treatment after a snowstorm might be liable to tenants who fall and sustain an injury. Even where a landlord claims not to have known about a dangerous condition, such as a rotting board on a staircase, they can be held responsible for an injury if it can be shown that the landlord failed to conduct inspections of the property over time which would have revealed the dangerous condition.

A personal injury lawyer needs to show that the property owner did not meet the standard of reasonableness under the law. The property owner does not have to guarantee the safety of all persons on the property but must meet a standard of reasonableness in keeping the property safe. For example, if a patron in a grocery store slips and falls on a grape that was just knocked from a produce display, the property owner will argue that this was an unpredictable event and that it would be unreasonable to require all grocery stores to post employees at the end of each aisle to constantly watch for random spills. The court will often look to whether the owner met an industry standard for safety, staffing or inspections.

Finally, a personal injury lawyer will need to show that the property owner bears sole responsibility for an accident. Maryland and D.C., along with just two other states across the country, still adhere to the old and disfavored “contributory negligence” standard. This means that if the plaintiff contributed to an accident through his or her own negligence, no matter how slight, the plaintiff will be totally barred from any recovery. For example, if a store positions a display table so the leg sticks out into the aisle, causing someone to trip and fall, the store owner will argue that even if its employees were negligent, the shopper contributed to the incident by not watching where they were walking. If the plaintiff can be shown to have been just 1% negligent in an incident, their claim is barred and the 99% negligent property owner owes nothing. This harsh rule has defeated numerous slip and fall and other injury claims and left seriously injured citizens owing substantial medical bills and lost wages, with no recourse against the parties primarily responsible. This reason alone should be an incentive for every person who has sustained a slip and fall injury to contact an experienced attorney immediately after such an incident to fully understand their legal rights and prepare the best case possible.

Have You Been Injured in a Maryland Slip and Fall Accident?

If you've been injured in a slip and fall accident , you need to speak with an experienced slip and fall attorney as soon as possible. Please contact us online or call our Gaithersburg office directly at 301.840.0404 to schedule your free consultation.