As you drive around the state, you may occasionally see an all-white bicycle chained to a street sign or telephone pole.  It may be adorned with flowers or signs.  And it never moves.  And it really is all-white, even the tires. 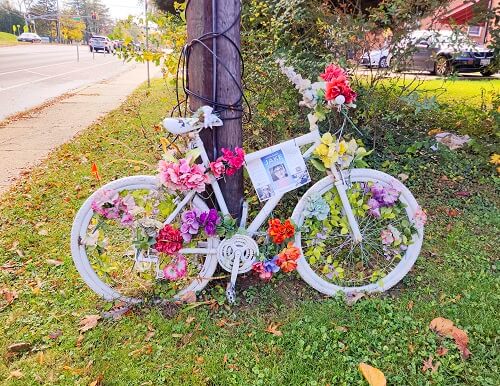 If you don’t know, these mysterious looking bicycles are Ghost Cycles.   Each of these bikes marks the location of a fatal traffic collision involving a bicyclist and a vehicle.  This is a nationwide program and sadly, Ghost Cycles can be found in virtually every state.  Ghost Cycles are a tribute to the deceased bicyclist and a reminder to the rest of the community of the terrible consequences of not giving full attention to your driving. While the auto industry has implemented numerous safety advancements in cars over the past few decades, bicycles are not much different than when they were first invented. They have no air bags, no crumple zones, and no seat belts.  None of the safety advances that protect motorists.

We have represented scores of bicycles riders who have been struck in traffic collisions.  Our experience here at Sussman & Simcox confirms one truth . . . in a collision with an auto, the bicycle and rider always lose. 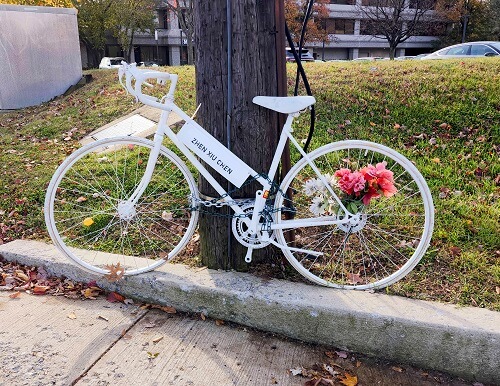 Maryland is now going through a period of transition regarding bicycles.  Environmental, traffic, and health concerns have almost every county and municipality across the state now encouraging people to park their cars and use bicycles as the primary method to get to work, school, or the local store.  This effort will invariably put more bicycles out on local streets. But while the counties are taking steps to promote bicycle usage, they are not taking adequate steps to protect cyclists or to educate motorists.

Until we have separate dedicated lanes that isolate bicycles from busy traffic lanes, bicycles and vehicles MUST share the public roads, and motorists should be ever vigilant for bicycles nearby.  You may not see a Ghost Cycle every day when out in traffic.  That’s a good thing.  The fewer, the better.  But as drivers, each of us should remember that a bicycle could be right around the next bend in our travel lane.  Or when we are about to make a right turn on red, and looking for traffic coming from the left, a bicycle could be coming from the right onto the crosswalk in front of our car.  WE are the only near-term solution to Ghost Cycles.